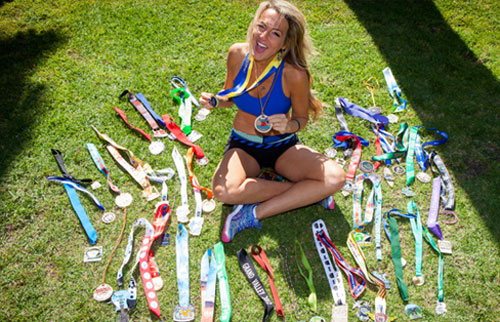 A Message from Julie Weiss

For those of us who’ve lost loved ones to cancer, we all wish we had more time with them. I am honored to have been selected to serve as a brand ambassador... Read more

Spirit of the Marathon II

One of the seven runners featured in the Spirit of the Marathon II, Julie Weiss is a veteran marathoner from Santa Monica, California. She began a quest at the Rome Marathon to run one marathon a week for a year to honor the memory of her father on an emotional journey to spread awareness and raise money for pancreatic cancer - the devastating disease that claimed his life. This quest earned her the title of "Marathon Goddess", a woman who is an inspiration and a force for change. Read more

Create Your Own Event for a Good Cause

How to Find Support while training to run for a cause

Things Not to Do Days before Your Marathons

Don’t Let The Weather Stop You! Train for Marathons on your Treadmills

Is It Great To Donate A Car?

Can We Donate A Car?

How to Avoid Injuries When Preparing for Triathlons

Run for Life: Why Run for a Cause like Cancer

Do’s and Don’ts The Week before the Marathons

How a Support Team Would Help You Prepare for Marathons

Do You Have To Train for Marathons Alone?

Half Marathons Are Fun Too!

Have questions or need support?